A year later, Sabina still hadn’t made her decision, but in the year since her grandmother’s death, she met a young man, Paul, for whom she was smitten. She shared her past with him and of course, told him all about the ring and what it meant to her.

“You never, ever take it off?” he asked, perplexed.

“Not even in the shower?”

“What about when you’re playing the piano?”

“Nope, I still wear it then too. I just make sure it is not in my way. But it’s always on. My grandmother left very specific instructions when she gave it to me. She said to remember to always wear it and never take it off.”

He just shook his head. What kind of crazy grandmother was this, he wondered silently.

“What about when you get a manicure?”

“Oh, Paul, let’s not be so legalistic about it. Everyone knows you have to remove your jewelry for a manicure.”

So Paul did not expect what would happen the day he proposed. He had a special hand-crafted 3 karat diamond ring made especially for his beloved Sabina, that he bought on credit. He planned a romantic and exciting evening out on the town but when he got down on one knee and proposed and Sabina said yes (through tears), he expected to slip her ring right on…but when he did, he crashed right into the Bee ring.

“Um, can you take that off and put it on your other hand,” he whispered…not wanting to be embarrassed since there were several people witnessing the special moment.

He let it go that night, but the next day, he had to bring it up. Sabina, now you’re being unreasonable. Your grandmother said that you could take the ring off, Sabina. She wanted you to live, to marry, to put the ring in its proper perspective. Isn’t that what the final letter said?”

Yes, Paul, but she thought the ring had become a burden to me. It is not a burden. I love this ring and everything it symbolizes. I’m choosing not to take it off.

“Can’t you just wear it on your other hand?”

“No! This is the finger that she put it on and this is where she wanted it. I am not going to dishonor my grandmother for you or anyone else. I didn’t take the ring off for my auditions, to get ahead in my career and I am not going to take it off for you. I love you, but…” her voice trailed. “Paul, in her last letter to me, my grandmother specifically said, ‘if you love me, make sure this ring always stays in its special place.’”

Paul decided not to push it and convinced himself that it was okay for his engagement ring to share a finger with the Bee ring.

Even though they struggled financially, the first few years of their marriage (to some degree due to the expensive ring that he bought on credit), Sabina never considered taking off her ring in order to tap into the inheritance that Grammy B had left for her. Paul never knew about the stipulations in the will and she hoped he would never find out.

“God will provide,” she reasoned. “He will honor my commitment to my grandmother’s wishes.” 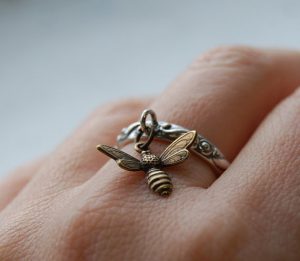 After reflecting on this allegory, comment below with answers to these questions.