A couple of weeks ago I had the awesome privilege of sharing part of my testimony of leaving Adventism with a group of ladies at church. Because I love media literacy so much, I wanted to show them how, through images and story, Adventist doctrines are taught to children. And how these beliefs shape how Adventists think, believe and relate to the world. Leaving Adventism is more than simply switching churches or denominations, it’s a complete worldview-shattering, foundation-shaking experience.

As a child, I absorbed the central importance of what Adventist call “The Law of God” through pictures.

Take a look at these pictures.* What message do you think a child digests when pictures like this accompany text explaining the importance of the Sabbath and keeping the 10 commandments? 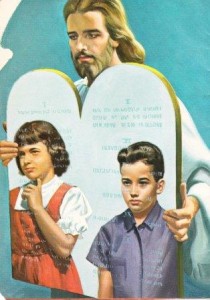 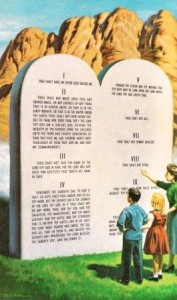 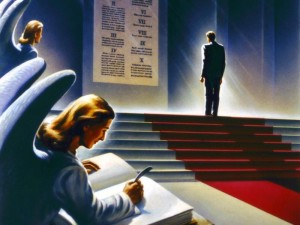 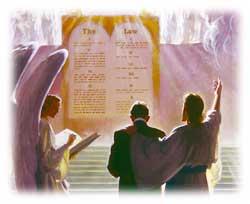 Is it any wonder that when sharing with an Adventist that the Old Covenant law is obsolete (Hebrews 8:13), cancelled (Hebrews 10:9) and ended (Ephesians 2:15), the very concept is unthinkable? preposterous? absurd?

“So now there is no condemnation for those who belong to Christ Jesus.  And because you belong to him, the power of the life-giving Spirit has freed you from the power of sin that leads to death. The law of Moses was unable to save us because of the weakness of our sinful nature. So God did what the law could not do. He sent his own Son in a body like the bodies we sinners have. And in that body God declared an end to sin’s control over us by giving his Son as a sacrifice for our sins. He did this so that the just requirement of the law would be fully satisfied for us, who no longer follow our sinful nature but instead follow the Spirit” (Romans 8:1-4).

*All pictures © Review & Herald Publishing Association. Used in accordance with fair use principles outlined in the U.S. copyright laws.